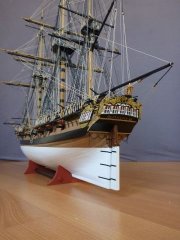 By kier, March 6, 2019 in Building, Framing, Planking and plating a ships hull and deck