The Jeroboam by josh44 - Ship in Bottle - FINISHED 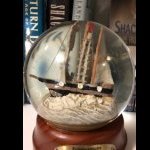