In Japanese, this is a 保津川下り舟 or Hozugawa kudari bune. It is a "downriver" boat, because these boats were traditionally run down the Hozu river and through the rapids to carry goods down from the mountains to the old capital city of Kyōto.

In the old days, the nearly 40-foot long boats were then hauled back up the river, manually, by the boatmen wearing cloth harnesses attached to long ropes. They would hike the rocky shores of the river, 3 at a time, while a fourth boatman would stay on the boat or on the shore, pushing the boat away from the rocks with a heavy pole.

This is how it was done for centuries on the Hozu river as well as many other rivers. You can see many Japanese woodblock prints where boatmen are depicted walked along a river, hauling on ropes to pull boats upriver.

This models is made from Japanese cypress, Hinoki, and is based on some drawings provided by boat builder Douglas Brooks. The last wooden kudari boat was specially built in 2009, the first wooden boat of its type built in 60 years. Today, the tour boat company that operates on the Hozu river, uses fiberglass boats based on this design. Sadly, the last wooden boat fell into disuse, was not maintained, and was broken up in 2019.

These old wooden boats were particularly interesting in that the planking was not symmetrical. The bottom planks are made relatively short, and the floor planks closer to the bow are tapered. The planking arrangement is said to allow damaged planks to be more easily replaced.

My own model is something of a hybrid of old and new. I had to base construction on photos of the wooden boat, but some changes had been made since its construction to make it more easily used as a tour boat. I tried to avoid adding the more modern touches, but I had few references to guide me at the time.

I've since found photos of the boat when it was first put in the water in 2009. Plus, I now think I have a better understanding now of what was traditional and what was not.

Edit: Just discovered this interesting (soundless) footage on Youtube that shows a boat being hauled up river and run down the river: 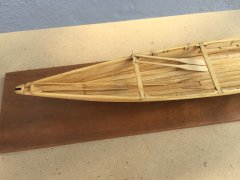 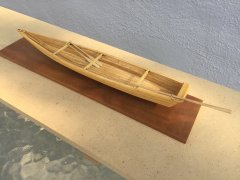 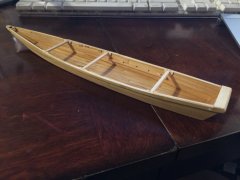 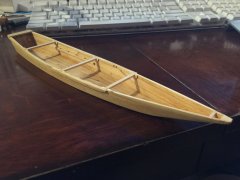 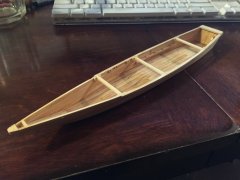 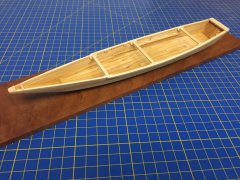 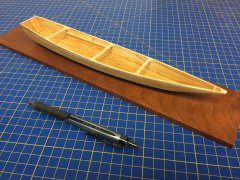