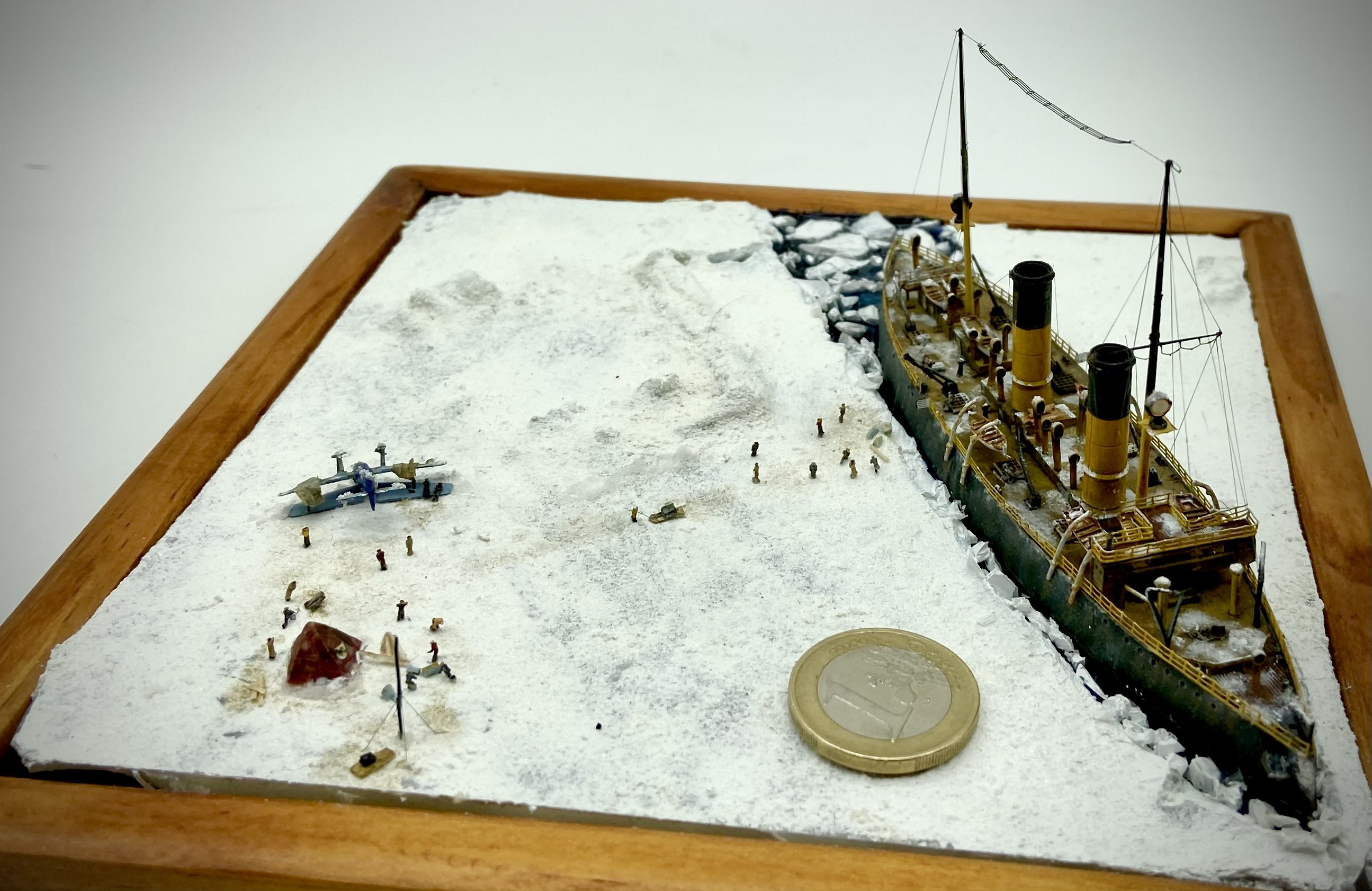 The first icebreaker Krassin (Russian: ??????) was built for the Imperial Russian Navy as Svyatogor. The icebreaker was built by Armstrong Whitworth in Newcastle upon Tyne under the supervision of Yevgeny Zamyatin. The vessel was launched as the Svyatogor on 3 August 1916 and completed in February 1917. Up to the beginning of the 1950s she remained the most powerful icebreaker in the world.  During the allied intervention against the Bolsheviks in Northern Russia (1918–19) she was scuttled by the Royal Navy. They raised her for use in the White Sea and later brought her from Devonport to Scapa Flow for crushing hurdles put up to prevent German submarines entering. During this time she undertook minesweeping duties.  Svyatogor was returned to the USSR under the Krasin trade agreement in 1921. In 1927 this icebreaker was renamed by the Soviet government to honor a recently deceased early Bolshevik leader and Soviet diplomat Leonid Krasin.  In 1933 Krassin became the first vessel to reach the inaccessible northern shores of Novaya Zemlya in the history of navigation. In 1938, the Krassin rescued Icebreaker Lenin and her convoy, trapped in ice at the end of the previous summer.  During World War II, Krassin participated in many Russian convoys. In 1941 the US Government entered into negotiations with the Soviet Government for the purchase or lease of one or more of their modern ice breakers for use by the US Coast Guard on the east coast of Greenland. The Krassin was offered, and crossed the Pacific to Bremerton, Washington. She was surveyed and found to be in need of repairs totalling about $500,000. Funds were allocated from President Franklin D. Roosevelt's "Emergency Fund for the President", but negotiations came to an abrupt end on 25 November 1941. Although the Krassin never served in the Coast Guard, the service gained valuable knowledge about icebreakers that was put to use in the design of the Wind class icebreakers.  She continued her journey through the Panama Canal to Great Britain, where she was armed with surface and anti-aircraft guns and proceeded to Reykjavik, Iceland to join convoy PQ-15. She escorted the convoy through the North and Barents Seas, around the Kola Peninsula and into Murmansk. In 1942 the Krassin and Lenin were spotted at the Mona Islands in the Kara Sea by a Kriegsmarine plane during Operation Wunderland. The heavy cruiser Admiral Scheer rushed to find them, but providential bad weather, fog and ice conditions saved the icebreakers from destruct.  Between August 1953 to June 1960, under the East German war reparations program, Krassin was extensively reconstructed at VEB Mathias-Thesen-Werft, Wismar, Germany. Until 1971 she served the Arctic Northern Sea Route. Then the icebreaker was used as an Arctic scientific vessel. The icebreaker was owned by the International Fund for the History of Science. [5] Arkady Melua, as a president of the International Fund for the History of Science, took part in the transfer of the icebreaker "Krasin" to the balance of the fund. The transfer took part on August 10, 1989. The icebreaker was then used for the import of used cars from Europe to Russia, and then was sold by Melua to the JSC "Tehimeks." JSC "Tehimeks" planned to sell the icebreaker to the United States of America to be broken up as scrap metal. After the failure of the deal caused by the Russian government it was registered at St. Petersburg, where it was docked as a floating museum.  After the war, the historic icebreaker took an active part in research expeditions in the Polar Ocean and led Soviet cargo convoys through the polar region. Rather than being destroyed (like the Icebreaker Yermak) to make way for more modern ships, the Krassin was preserved and restored. The vessel is now a museum ship in Saint Petersburg, the only icebreaker maritime museum commemorating the Arctic convoy.  Perhaps the most famous duty the Krassin performed was rescuing General Umberto Nobile and his surviving crew when their airship Italia crashed on the ice upon returning from the North Pole in 1928.

On May 23rd, the airship Italia, with 16 people on board, including 12 crew, three scientists, a journalist and dog Titina (Nobile’s mascotte), set off to reach the North Pole, a stop on the pack to allow data recordings by the three researchers and return to Svalbard or go to Alaska, depending on weather conditions.
The next day, May 24th, 1928 at 1:30 am (Greenwich Time), the airship Italy touched the North Pole; because of a storm approaching it was not possible to make the scheduled stop on the ice, after two hours, the airship took the way back.
The bad weather continued and strong winds made it difficult to fly back to King’s Bay. Near the end of navigation, in sight of the mountains of Svalbard, because of the storm and technical problems arose along the way, the airship lost altitude going down dangerously; At 10.30 of 25th May airship Italia impacted violently on the ice.
The cockpit broke away from the airship, which, lightened, continued his run resuming share; board airship were six men. These men are scattered, and nothing has been found since today, it assumes that went submerged in the Barents Sea.
They found themselves in nine on the ice: Nobile, seriously injured with fractures to the legs and one arm, Zappi, Mariano, Viglieri, the radio operator Biagi who had brought the emergency radio with him hugging its tightly, Trojani, Cecioni with a broken leg, scientists Malmgren and Behounek, the tenth, Pomella, was found dead not far away, the dog Titina was found alive on the ice.
A crew member remained in the airship which was recovering altitude, realizing that the airship was not manageable and could not return back, immediately threw out everything that could serve to the companions on the pack.
The fit men on the ice found the little support radio intact, an emergency bag with a colt and a hundred ammunition, a flare gun, a sleeping bag and various other things, and  they also found the tent that should have been used to stop at the Pole, sized to accommodate four people.
The small tent was erected and was painted red with bottles of aniline found in the wreckage to make it more visible; the radio was equipped with an aerial built with the remains of the cabin of the airship and was able to transmit.
On June 22nd, two Italian seaplanes plus two Swedish aircraft, identified the survivors, dropped food and supplies; the day after the Swedish pilot Lundborg was able to land near the red tent. Despite the denials of Nobile who wanted that the other wound  crew membin need of care, was shipped immediately, Lundborg was unshakeable to carry first commander, possibly due to request of the insurance company that had signed a life insurance policy of huge amount with Nobile. Nobile and the dog Titina transferred at King’s Bay, Lundborg flew away to go to help the other man wounded, while landing on the pack seaplane overturned and the pilot got stuck with the others.
Meanwhile the Soviet icebreaker Krassin, which had sailed from Leningrad on June 16th, approached the scene of the disaster, July 12th  at 8 pm sighted survivors of the red tent taking them on board; the diorama represent this moment. 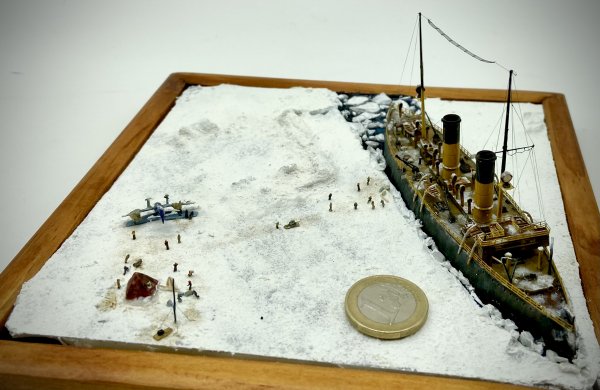 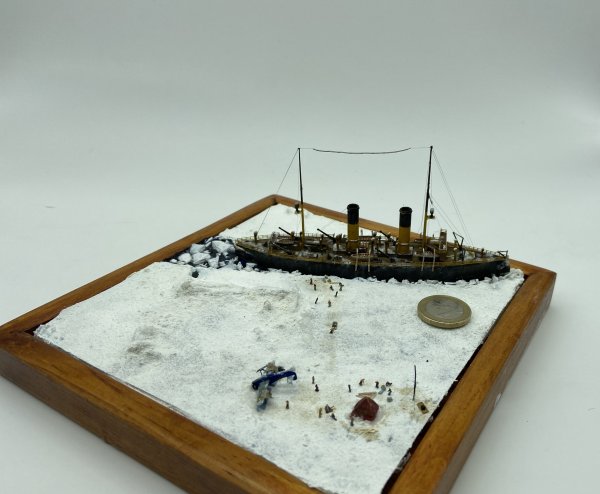 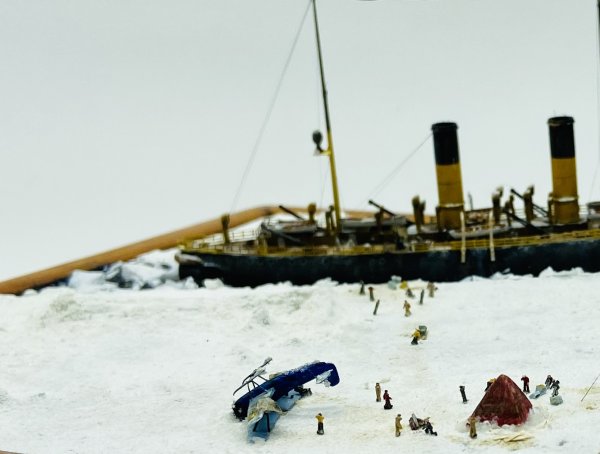 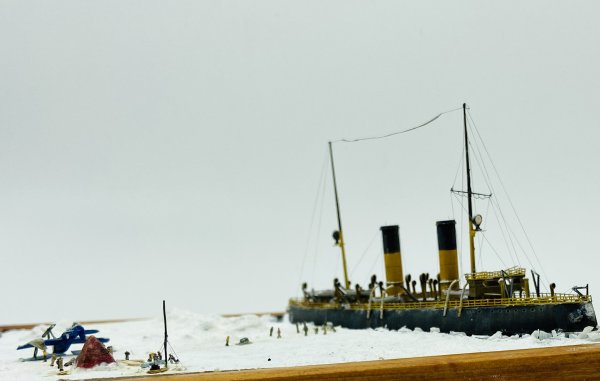 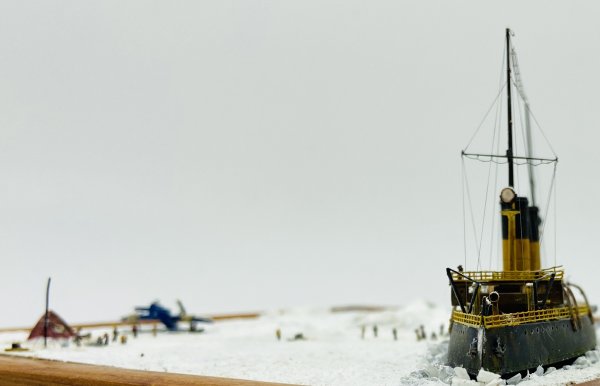 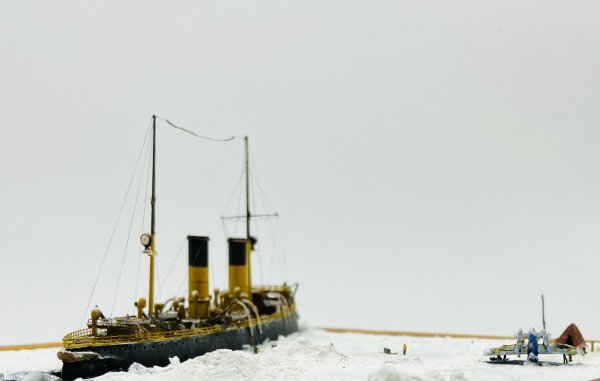 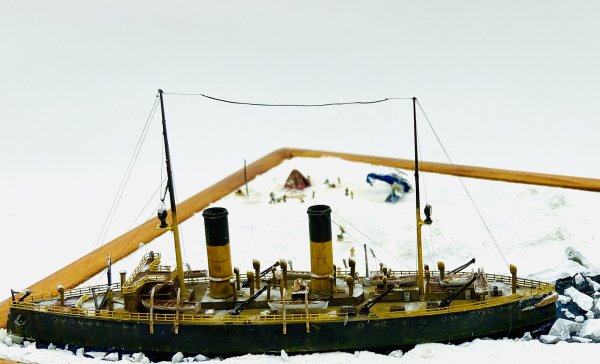 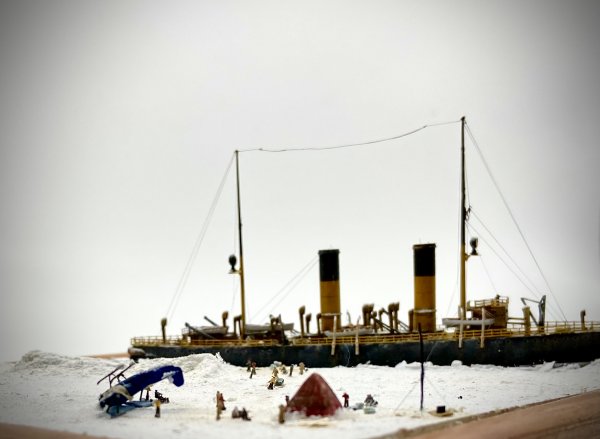 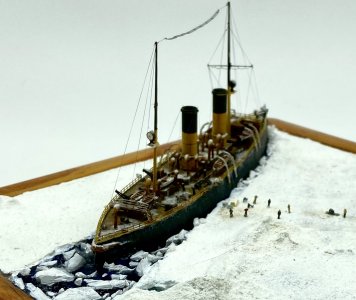 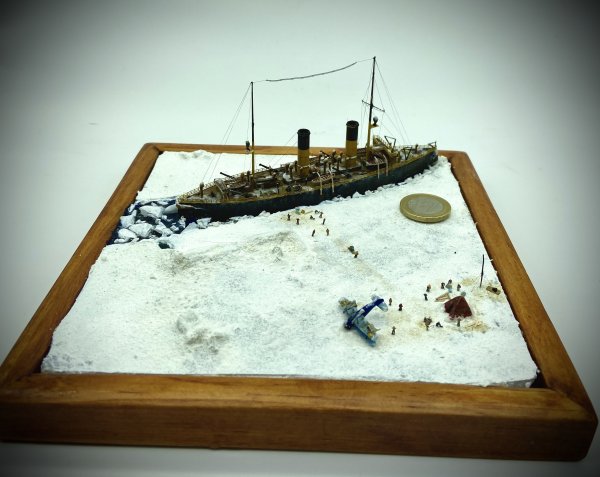 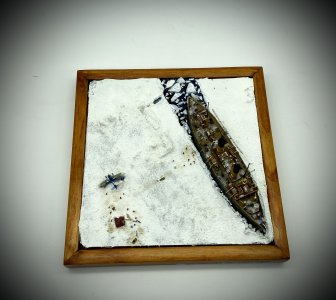 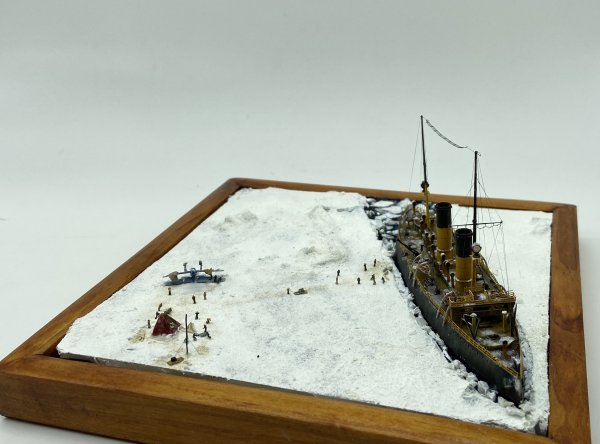 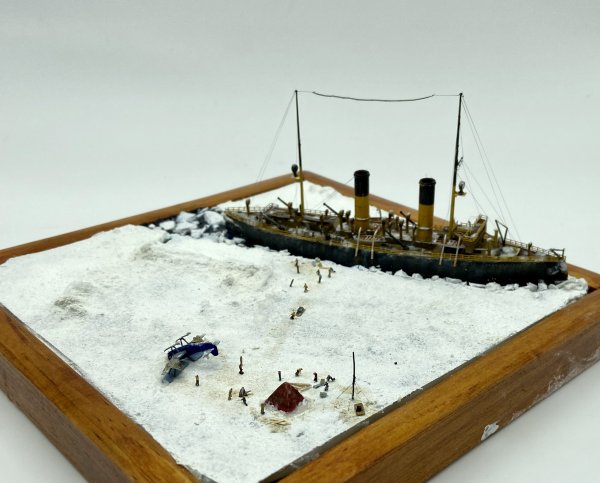 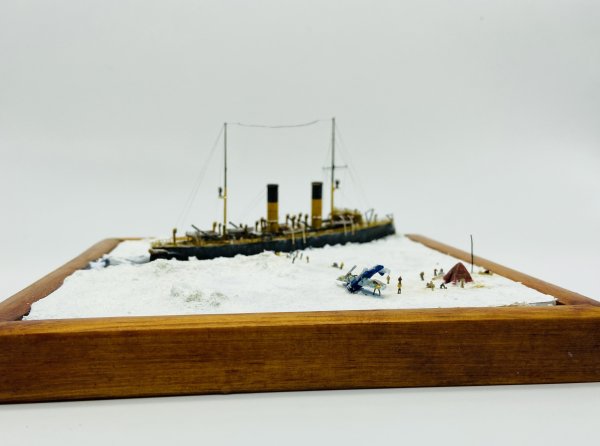 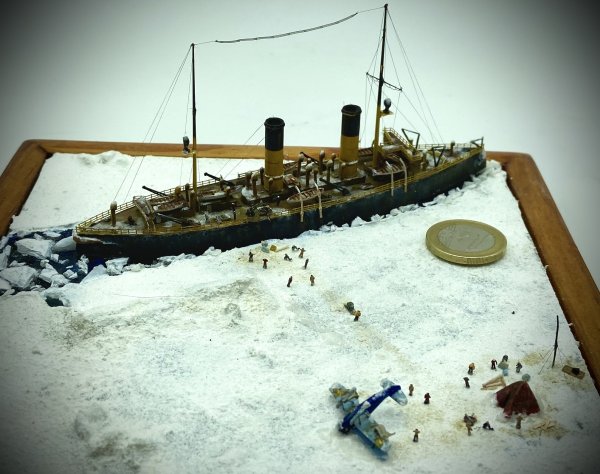