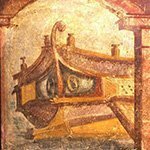 360 Virtual Dive of an Icelandic Shipwreck