When to add the keel onto the false keel? 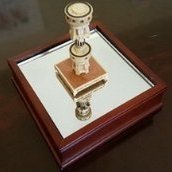 By Nirvana,
November 19, 2013 in Building, Framing, Planking and plating a ships hull and deck