A Model Railroader adding ships to the repertoire! 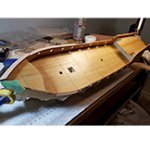